VUE CON 2017
The Friday Morning Antiques Study Group began in 1973 at the hands of Jane Johnson, who is a long-time resident of North Platte.  Jane fostered her love of antiques by assembling a group of friends with like interests and meeting each month.  Their meetings consisted of breakfast at homes of members, a show and tell by the hostess about her favorite antique item or collection, and lots of discussion.

When Jane heard about The Questers, she thought,  "This is just perfect for our group."  She ordered information about forming a Quester chapter,  offered the information to her friends and on June 16, 1982, Prairie Treasures #1018 was officially born.  Throughout the years, we have had many fascinating programs, visited historic places, and completed service projects in our city and surrounding area.   We are always looking for new members and welcome visitors at our meetings.  We meet on the 2nd Friday each month at 10:00 a.m.  For more information about us, please leave a message on the Contact Us page.​ 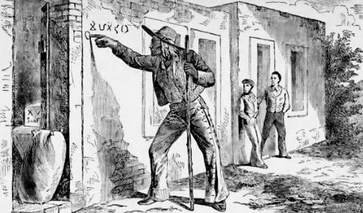 ​In November, our meeting program was "Hobo Signs & Symbols".  We learned that the Hobos were not Bums, because Hobos wanted to work to support themselves and their families, whereas Bums would not work at all.  Hobos developed a language of symbols and left signs for other Hobos to help them find the things they needed for survival.  Many men became Hobos at the end of the Civil War because they had no way to get home when they were dismissed from service.  The railroad systems provided a free way to travel so they could search for employment.
Pictures in the Header
The first picture in the top row of the Header is of The Fort Cody Trading Post.  From the outside, it looks like a frontier log stockade with authentically dressed mannequins with toy rifles standing guard.  Inside it's a combination gift shop and museum, with authentic Buffalo Bill and Wild West memorabilia, plus a hand carved miniature mechanized Wild West Show made of 20,000 parts.  A taxidermy two-headed calf and frontier cannons are among the other curiosities to be seen.  Find jewelry, moccasins, and coonskin caps among many other gifts to take home, too.

The second picture in the top row of the Header is of the world's largest reclassification rail yard.  Thousands of rail cars travel through here every day to be reclassified and rerouted on their way.  North Platte's history is tied to the Union Pacific Railroad from its beginning.  The rail yard once contained a "round house" repair facility that also provided shelter to citizens during Indian attacks.  Many new citizens came here on trains and to this day, the Union Pacific Railroad is the largest employer here.

The third picture in the top row of the Header is of Buffalo Bill's 1880s Victorian house located in Buffalo Bill Ranch State Historical Park.  The property also has a horse barn and outbuildings of Cody's famous Scout's Rest Ranch.  The site features Wild West Show memorabilia, period household furnishings, picnic areas and walking trails.  On April 11, 1944, the Paramount Theater in North Platte hosted the world premier of the technicolor movie "Buffalo Bill." The amazing story of the Indian fighter and scout who made North Platte his home for many years was brought to the screen with Joel McCrea taking the part of Buffalo Bill.  Featured actors were Maureen O'Hara, Linda Darnell, Thomas Mitchell, Edgar Buchanan, Anthony Quinn and many others.

The first picture in the bottom row of the Header shows a bucking bronc rider at the Buffalo Bill Rodeo during Nebraskaland Days.  This rodeo stems from Buffalo Bill's activities in our area and draws cowboys and cowgirls from all over the United States and Canada.  Complete with a Miss Rodeo America competition, the rodeo is an exciting and very popular attraction during the month of June.

The second picture in the bottom row of the Header is of the Golden Spike Tower and Visitor Center west of North Platte.  It provides a birds-eye view of Union Pacific's massive Bailey Yard.  In 1995, the Guinness Book of World Records recognized the Bailey Yard as the world's largest railroad classification yard.  It has since grown by 25 percent.  It stretches eight miles and covers nearly 3000 acres.

The third picture in the bottom row shows a Wild West stagecoach and horses coming to the Buffalo Bill Rodeo.  Apart from being transportation for old west citizens, stagecoaches also transported mail, supplies, and many other things.  They are now popularly showcased items in rodeos and parades.
.