VUE CON 2017
The Dome Rockers#1487 derived their name from a rock formation along the Oregon Trail near the city of Gering.  As the wagons on the Oregon Trail left Chimney Rock near Bayard, they began to look for the next landmark.  This area became known as Mitchell Pass and was one of the most striking pieces of scenery on the Great Plains.  Through this tortuous and narrow gap moved thousands of covered wagons, hundreds of military expeditions, and shuttle of stagecoaches, Pony Express Riders and the first trans-continental telegraph line.

The Bluffs comprised of sandy colored clay identified this pass.  The largest formation became known as Scotts Bluff named for the trapper that died nearby.  There are five formations, and each was given a name.  Dome Rock, the first and largest, was so named because it looks like a dome.  Others were called Crown Rock, Sentinel Rock, Eagle Rock and Saddle Rock.  The members in our group all share an interest in history, historical sites, and all landmarks, especially along the Oregon Trail.  Our name reflects our pride in our local history.

Chapter meetings are held on the second Tuesday of the month at 1:00 P.M. except in June, July and August.  There are 16 members.  A telephone call will remind members of the meetings.  RSVP your regrets to the hostess.  Officers are elected for two year terms.  Dues are $28.00.   State Day is held in April when all chapters are invited to the host city.  International is held in May in host State or Province. 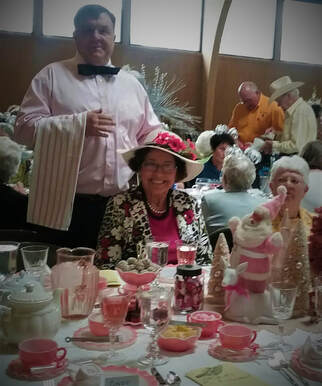 Dome Rockers 1487 chapter attended the PEO of Torrington, Wyoming, Spring Table Setting Tea in May, 2019.  PEO is a philanthropic organization that grants college scholarships to women students.  Fellow Dome Rocker Cindy Duncan decorated a table for this event assisted by Myrna Stuckert and Anita Duncan using the theme "Christmas Tickles Me Pink."  Cindy's favorite Hazel Atlas Pink Crinoline dinnerware was selected for the pink Christmas themed table.  The dishes were accented with Anita's silverware she received as a graduation gift in 1958.  We could imagine Grandma's hands carefully screwing in the light bulbs in the small pink cellophane tree with anticipation of family coming for Christmas Eve dinner.  Howard Gale pink Santas with decorated trees and deer gave a soft quiet feeling of winter...  We loved our butler Floyd Duncan, Cindy's husband, handsomely sporting black tie and pink shirt, lending a hand in the fun.  Joining him in the picture is Cindy's beautiful mother Doris Rush wearing her finest spring "bonnet".  They are one of two mother/daughter pairs in our chapter.  This table setting tickled us pink too.
​
Pictures in the Header
The first picture in the top row is of Dome rock.  The butte is 4,396 feet above sea level.  It is called Dome Rock because of its peculiar shape. It appears from a distance more like a grain elevator. The name “Dome Rock” was officially adopted by the U.S.G.S. on June 11, 1941.  Dome Rock has been referred to by many names down through history, such as a: tower, spire, lighthouse, castle, church and cathedral.

The second picture in the top row shows Chimney Rock.  This imposing landmark is composed of layers of volcanic ash and brule clay dating back to the Oligocene Age (34 million to 23 million years ago).  Chimney Rock was one of the best-known landmarks along the Oregon and Mormon Trails. Approximately 500,000 pioneers passed by Chimney Rock on their way west. No one really knows the origins of the name of the rock, although the title “Chimney Rock” probably originated with the first fur traders in the region. In the early nineteenth century, however, travelers referred to it by a variety of other names, including Chimley Rock, Chimney Tower, Nose Mountain and Elk Peak, but Chimney Rock had become the most commonly used name by the 1840s.

The third picture in the top row is of the Lake Minatare Lighthouse, an historic mock lighthouse located on Lake Minatare near the city of Scottsbluff in Nebraska. The 55-foot tower was built by the Veterans Conservation Corps in 1939 and is currently located within the North Platte National Wildlife Refuge.  Designed as a combination shelter house and observation tower, it was "built to simulate a lighthouse."

The first picture in the bottom row is the Legacy of the Plains Museum, a destination for people interested in the stories of human and agricultural history in the North Platte Valley and High Plains. The exhibits focus on the archaeology of Native American and Westward Expansions, the lives of pioneering settlers, the establishment of irrigation, the development of rural communities, the diversity of culture on the High Plains, and the innovative technologies and cultural practices of raising animals and crops in the semi-arid environment.  The Omaha World Herald recently called the Legacy of the Plains the  best regional museum in the United States (notice the painted quilt block designs on the side of the building.)

The second picture in the bottom row is Eagle Rock.  Looking like a halved dome, Eagle Rock is 4,482 feet above sea level. In 1853, Mariett Foster Cummings stated “There is a pass through that is guarded on one side by Sugar Loaf Rock [Eagle Rock], on the other by one that resembles a square house with an observatory [Sentinel Rock]. There is one (nearest the river) that is certainly the most magnificent thing I ever saw.” Eagle Rock forms the north side of Mitchell Pass through which thousands of emigrants drove their covered wagons single file and Pony Express riders galloped to deliver mail.

The third picture in the bottom row is of Riverside Discovery Center.  Riverside Park is Scottsbluff's city park, and has the only zoo in western Nebraska. It includes three lakes with camping and recreation areas, and a riverside trail that runs along the banks of the North Platte River. There are also over 30 garden spots. December 16, 2017 two brother grizzly bears went on exhibit. In the spring of 2017 their mother was illegally killed in Wyoming. State and Federal wildlife officials hoped the two orphaned cubs would survive in the wild without their mother.  When it was evident the cubs were not going to survive in the wild on their own, State and Federal wildlife officials made the decision to capture the two cubs and try to find them a home. Riverside Discovery Center offered to assist in the rescue of the two cubs and to provide a new home for these two grizzly bear cubs.