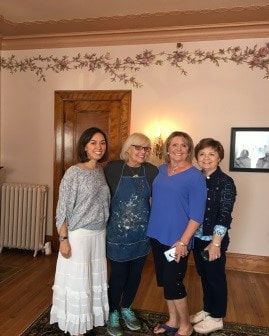 “La Belle Vue – Beautiful View” was an early explorer’s remark when he saw the wooded bluffs just west of the Missouri River.  Legend explains that Bellevue, Nebraska was named about 1805 by Manuel Lisa, a fur trader and entrepreneur from St. Louis, Missouri.  Whether or not the legend is true, the name remained.
The history of Bellevue is one of the most colorful chapters in Nebraska’s history.  About 1823, the village of Bellevue, a trading post on the Missouri, was the first permanent settlement in Nebraska.  The city has many other firsts.  Bellevue had the first newspaper and the first post office in the territory.  Its restored Presbyterian Church is the oldest standing church edifice in Nebraska.  The school district is also the state’s oldest with the first school for children of permanent Nebraska settlers, opening in 1833.
The selection of an appropriate name for our chapter, “La Belle Vue” reflects our enthusiasm and pride in our local heritage.  We are proud to be the first Questers’ chapter in our historical city.  (Written by Sandi Newberry and was placed in the Questers "What's in a Name?" filed at Questers International Headquarters in October 1980)
​
La Belle Vue #933 has had a wonderful Questers Year this fall and winter.  In September our Meeting Place was the lovely Joslyn Castle.  La Belle Vue President, Lu, volunteers at the Joslyn as a Docent.  Lu served as our docent and tour guide for our program.   Lu shared many stories and made the castle come alive for the ladies and their guests.  Our hostess for the day was Marge.  The ladies had a real treat when we toured Mrs. Joslyn’s bedroom which is being restored to its original paint and border.  The artist, Vija Bolin, was just putting on the finishing touches and we got to watch her fascinating work and listen to how she accomplished it.
​
In October, Bev invited us to the home of world traveler and adventurer, Betsy Buschkemper.  Betsy presented her exciting life story as she related interesting stories and showed the group her collections from all the places she has lived and traveled.  Betsy has led an amazing life.  As winter begun to surround us in late November, the ladies of La Belle Vue found warmth and cheer at Lori's home.  Lori gave a program on Vintage Christmas Blow Molds.  Her home was “Beginning to look like Christmas”.  In December, Chalice welcomed us into her home for a delicious soup luncheon in her lovely decorated home. It was a delightful way to enter into the Christmas Spirit.  January found us at the home of Pam.  Pam shared her recent trip to Ethiopia with a focus on the famous rock-cut monolithic churches.  Foremost was the church in Lalibela, the high place of Ethiopian Christianity.  Pam shared a slide show which showed the beautiful Church.  Pam explained the high feast day of the Baptism of Jesus as she related their experiences in being present in Lalibela for this day of pilgrimage and devotion.  La Belle Vue is so proud of their new members this year, Mariah and Jeanette. 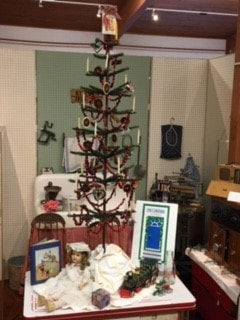 
​La Belle Vue decorated a feather tree in Victorian style to grace the Sarpy County Museum in Bellevue under direction of Lorraine Jeffus, tree decoration chairman.  The group that decorated had a great time and urges everyone who can to view all the lovely trees that are on display throughout the Holiday Season.  These trees help to put folks in the "Spirit of the Season".  This has been a La Belle Vue #933 tradition for many years. 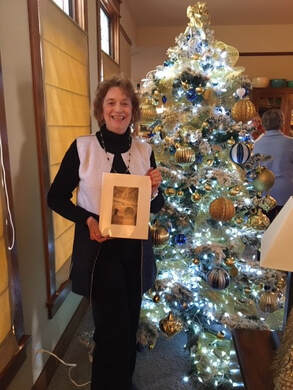 With the publishing of Building Omaha: The Architectural Legacy of John and Alan McDonald, a veritable treasure trove of information is revealed about the designs of the men who built Joslyn Castle (1903, John McDonald, Scottish Baronial Revival) and the Joslyn Memorial, now known as the Joslyn Art Museum (1931, John and Alan McDonald, Art Deco).
The book’s author, Joni Fogarty, began to research the project from her own doorstep. She and her husband, noted attorney Ed Fogarty, live in a 1910 Prairie Style home designed by John McDonald in the Omaha’s regal Gold Coast neighborhood.
Joni Is a respected Omaha historian, the author of several books and is a long time member of  Questers La Belle Vue # 933.  Joni serves on Mayor Jean Stoddard's Landmark Commission.  She recently led the way for Architect Thomas Kimball’s entrance into the Nebraska Hall of Fame. Joni spoke at the unveiling of the bust of Thomas Kimball on June 25, 2019 at the Capital in Lincoln.
The solarium was a favorite of all the Questers.  The room’s windows gave light, and a stained-glass skylight modeled after the main dining room of the North German Lloyd Lines luxury ocean liner, The Bremen, is a stunning addition to this room.  The music room still displays the original painted murals and crystal chandelier.  Rhonda took us throughout the mansion and pointed out beautifully appointed bedrooms and a newly renovated ball room.  Rhonda answered questions about the renovation.  She told the group how the kitchen was gutted and finished in Arts and Crafts style to match the dining room of the home.  An on-going project has been to strip and refinish the painted quarter-sawn oak in most of the rooms on the main floor as well as the second floor hallway, to return them to their natural beauty.  Rhonda and Wayne do rent the house for events for up to 100 guests.  La Belle Vue thanks the Stubergs for allowing us to visit this beautiful home.​
Pictures in the Header

The first picture in the top row in the header is the Fontenelle Bank constructed in 1856 to function as a bank in Bellevue; however, the bank failed in the following year and was it turned into a court house.

The second picture in the top row in the header is the entrance to Old Towne Bellevue.

The third picture in the top row is The First Presbyterian Church of Nebraska that was built in Bellevue in 1850 and is the oldest surviving  structure built as a church in Nebraska.

The first picture in the bottom row is the Bellevue log cabin that was built in 1835 in the Missouri River flood plain. Soon after 1835 cholera occurred at lower elevations and the cabin was moved to a higher plateau.

The second picture in the bottom row is of The Columban Fathers Missionary Society that was founded in Ireland in 1918. Wanting to have a strong presence in America. Father Galvin constructed a seminary in Bellevue in 1921. The mission society is a tranquil island surrounded by Bellevue. Its headquarters are a separate entity with its own post office and and zip code.

The third picture in the bottom row is of The Bellevue train depot that serviced passengers along a spur line through several area communities. By the time the line closed a number of communities it was originally intended to service had dried up and folded.