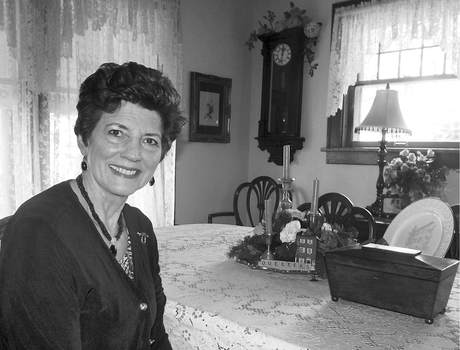 The following is from an article in the Bellevue Leader by Eugene Curtin, Associate Editor.  May 23, 2018.

You never know when the call will come.  For Lorraine Jeffus, it came in 1995 after she and her husband, Bob, bought and expanded a 1920 farmhouse along Bellevue Boulevard. The additions, which included a three car garage and a main floor bedroom suite, matched the existing exterior of the house so precisely that it caught the attention of Sandi Newberry, a fellow member of First Presbyterian Church.
A group of ladies, Sandi told Lorraine, would like to see what had been done with the historic house.  And that was how Lorraine Jeffus met — and joined — the La Belle Vue chapter of The Questers, a small platoon in an international army of men and women that scours North America for historic artifacts worthy of restoration and preservation, and which gathers every year somewhere in North America for an international convention that Jeffus said is always “a lot of fun.”


Photo by Eugene Curtin
Lorraine Jeffus, pictured at her Bellevue Boulevard home, is closing out a two-year term as president of The Questers, an international body dedicated to the discovery and preservation of historical objects. The antique tea caddy pictured to her left is a gift from The Questers
in recognition of her service.

Twenty-three years later, Jeffus is closing out a two year term as international president of the 10,000 member strong organization that has hundreds of chapters scattered across 20 states and the Canadian provinces of Ontario and Alberta.
An antique tea caddy sitting on her dining room table, a gift from The Questers, bears testimony to her two presidential years.
“The most enjoyable part was the traveling, visiting 20 states and the province of Ontario,” she said. “Most of that was condensed into April or October because that’s when most of the chapters hold their meetings.”
There have been other, less congenial duties, of course — paperwork, staffing crises at the organization’s Philadelphia headquarters, keeping up with IRS rules and regulations for non-profits and reviewing and signing off on all sorts of legalese — but, she said, The Questers’ motto has held true: “It’s fun to seek and a joy to find.”
Jeffus was most recently seen at the Sarpy County Museum, delivering a few words about a Quester funded $4,500 restoration of the late artist Robert Gilder’s Wake Robin sign that long ago directed visitors to his Fontenelle Forest cabin and studio.  That, she said, is typical of a relatively new direction the organization is taking.
Ever since its founding in 1944 by Elizabeth Bardens, who built her friends’ curiosity about an antique blue syrup pitcher into an international organization of preservationists, The Questers focused on discovering historic artifacts, researching them and presenting findings at chapter meetings.  The Questers still do that, Jeffus said, but it is also placing more emphasis on providing grants to organizations — like the Sarpy County Museum — that may have an important artifact in need of restoration.
As her two year term winds down, Jeffus faces a further two years on the governing board as a non-voting advisor, a role she considers her farewell to the international stage. After that, Jeffus said, it’s back to basics.  “It’s like I’ve been running a big business,” she said. “When I leave the governing board I’ll focus more on the local Questers, try to be that point person who can increase the members and attract more people to our group. “That will be my focus.”
​​
_______________________________________________________________________________________________________________________________