Forget-Me-Nots Quester Chapter #620 welcomes you to Omaha or Omaha City as it was called when it was founded on July 4, 1854, shortly after the Nebraska Territory was established on May 30, 1854, soon after a treaty was signed with the Omaha Native American tribe.  The Omaha tribe was referred to as the “Maha” in the 1804 Lewis and Clark Journal and in 1815 and 1825 treaties.  In their tribal language Omaha was pronounced with the first syllable sounding like “oo” and the accent was on the second syllable, “u-ma’-ha.”

Forget-Me-Nots Quester chapter was organized February 27, 1973 after four of our chapter members visited a chapter in Iowa.  Our chapter name was suggested by Fran Holcomb to honor the flowers by that name that were long-time favorites in gardens of the past.  The name also fits with the Quester emphasis on preserving the past for future generations and learning about historical places, people, and things.

With eighteen regular members and one associate member, our roster includes antique dealers, men and couples.  Recent programs have included Terri Lee dolls, stenographs, wind-up toys, Chinese brush pots, and graniteware.  Upcoming programs include Bible quilts, flue covers, Hungarian porcelain, Tibet and history of the American flag.  We have enjoyed field trips to the windmill factory in Nebraska City and to the Bess Streeter Aldrich house in Elmwood, Nebraska.  Our next outing will be to the International Quilt Study Center in Lincoln, Nebraska to  see “War and Pieced,” an exhibition of quilts made by soldiers during war time.

Some of the main goals of Questers are restoration and preservation, so our chapter is very happy to have facilitated the floor restoration project at the Bess Streeter Aldrich house in Elmwood, Nebraska.  In May, 2018 our Forget-Me-Nots chapter received a grant from the International Questers Headquarters.  This grant plus money from our chapter will facilitate removal of not original, very dated carpet on the first floor of “The Elms” and restore the floors to their original state.  The project will be completed in January/February, 2019.   “The Elms” is open to visitors.  For information on hours, call (402) 867-4833.
​​
As Questers, we have collected many things.  We realize, however, that wonderful friends are the best collection of all.  If you have an interest in history, preservation, or antiques, our membership is open.  Information about joining is available on our “Contact Us” page.  Just click on the email address there and leave an email message including your contact information and any questions you might have.  One of our State officers will contact you as soon as possible. 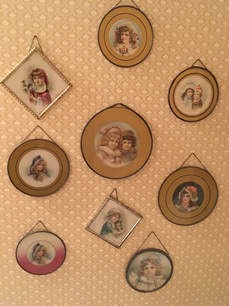 ​
​Flue Covers
A flue is a duct, pipe, or opening in a chimney used to conduct exhaust to the outside.  One spring ritual of Victorians was to hang a decorative flue cover over the unsightly and drafty hole left when the stovepipe was removed during warm weather.  The standard flue cover was 6-8”in diameter, round or oval glass featuring a colorful, pleasant image, such as a woman or child or a botanical print.  They were framed in brass or tin with a metal chain and cardboard backing.  They were often given away as store advertisements. 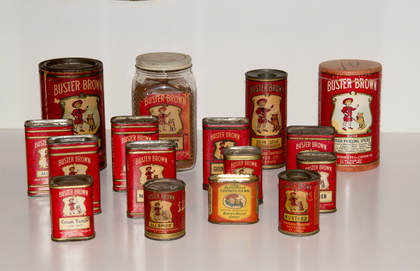 Buster Brown was a comic strip character created by Robert F. Outcault in 1902, and was adopted by the Buster Brown Shoe Company as their mascot in 1904.  Buster, his sweetheart Mary Jane, and his dog, Tyge were well known by the public in the early 20th Century.
Buster Brown did not advertise just shoes.  Two companies in St. Louis used his image on their spice cans.  He can be found on post cards, advertising cards, buttons, toy clickers, sewing kits and clothing.   Buster Brown suits made just like his were sold and many children of that era sported Buster Brown haircuts. 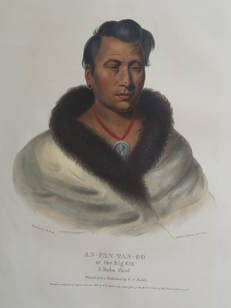 Big Elk
Big Elk, also known as Ontopanga, was a principal chief of the Omaha tribe for many years.  He was buried in Bellevue, Nebraska.  In the picture, he is wearing a presidential peace metal.  The picture is from an 1836 first edition McKinney-Hall volume on American Indians.   It is
hand-painted.
​
​We are saddened by the death of our President, Karyl Newman.  It was a tragic loss but we are very fortunate that our Vice President, Lee Harlan, has graciously stepped up. On April 5, 2019, our chapter will celebrate 46 years since the approval of our charter in 1973.  Evylyn Breunsbach, the first president, and Jenny Pfeifer remain the only two of 24 original members.

In September, Lue Puhrman gave an informative program on an 1886 Bible quilt done by African-American Harriet Powers.  October saw us heading to David City for a field trip.  Later that month, Jim Rosowski presented a program on antique flue covers with Ev Breunsbach showing many that hang in her home.  In November, we had Show-‘n’-Tell revealing new additions to our collections and held a silent auction to raise funds for preservation and restoration.  December brought our annual Christmas party and Secret Santa gift exchange.  Later in December, our chapter visited the home of Nicholas Newman to view his fabulous collection of over 1800 Christmas ornaments, most of which date from the 1920’s and 1930’s while nearly 600 go back to the Victorian period.
​ 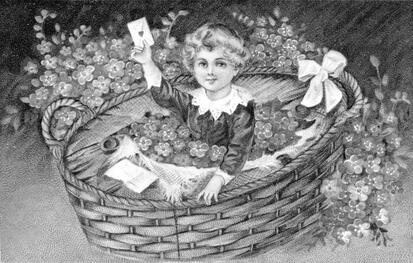 Pictures in the Header
The first picture in the top row of the header is of the Florence Mill.  During the winter of 1846-47, while waiting for better weather for their trip west, about 2,500 members of the Church of Jesus Christ of Latter Day Saints (the Mormons) established Winter Quarters in what is now north Omaha under the supervision of Brigham Young. Over 800 cabins and the Florence Mill to grind grain were built to meet the settlers' needs.  When the original mill was torn down, some of the good timbers from that mill were used in the new mill and are still there.  Today the Florence Mill is operated as the Winter Quarters Mill Museum and Art Loft Gallery.

The second picture in the top row of the header is of the Gerald R. Ford Birthplace and Gardens (not pictured) and Gerald R. Ford Conservation Center.  Gerald R. Ford, our 38th president was born Leslie Lynch King, Jr. in Omaha, NE on July 14, 1913.  His parents separated 2 weeks after his birth, and his mother moved with him to live with her parents in Grand Rapids, MI.  There she married businessman, Gerald R. Ford.  From then on, Leslie was called Jerry Ford.  Although he was never adopted, his name was legally changed to Gerald R. Ford, Jr. in 1955.  After an outstanding college football career, graduation from Yale Law School, serving 25 years in the U.S. House of Representatives, and as Vice-President, he became President in 1974 when Richard Nixon resigned.  His 865 day long presidency is the shortest in U.S. history for any president who did not die in office.
The Gerald R. Ford Birthplace and Gardens were dedicated in 1977 and mark the location where President Ford lived at his grandparent’s home for several weeks after his birth in 1913.  Adjoining the site is the Gerald R. Ford Conservation Center, a regional center of the Nebraska State Historical Society.  Founded in 1995, it provides conservation services for historic and artistic works.  The Center also contains a small exhibit of Ford memorabilia.  Both conservation and exhibits are available by appointment only.

The third picture in the top row of the header is of Chihuly Serenity.  Dale Chihuly is a world-famous blown-glass artist, yet despite having his art in over 200 museums and countless places around the world, there was something he had dreamed of doing but had not.  In 2014, Omaha philanthropist Walter Scott approached Mr. Chihuly about creating a space for meditation at the soon-to-be-built Fred and Pamela Buffett Cancer Center at the University of Nebraska Medical Center in Omaha.  The conversation revealed that Mr. Chihuly had always dreamed of doing a chapel.  Chihuly Serenity is the realization of that dream.  Designed to create a space where patients, caregivers, and researchers can go to find a moment of peace, it is filled with incredibly beautiful blown glass and is the cornerstone of the center's healing arts program.  Chihuly pieces are located throughout the center.  Chihuly Serenity is on the 4th floor.

The first picture in the bottom row of the header is of "The Elms."  Located about 50 miles from Omaha in Elmwood, Nebraska, “The Elms” is the prairie mansion-style home built in 1922 by Nebraska Hall of Fame author, Bess Streeter Aldrich and her husband Captain Charles Aldrich.  While living there from 1922-1946, Mrs. Aldrich published over 100 short stories, 12 books, and 1 movie,  “Cheers for Miss Bishop.”  “The Elms” is on the National Registry of Historic Places.

The second picture in the bottom row of the header is of Lauritzen Gardens in Autumn.  Located at 100 Bancroft Street in Omaha are 100 acres of botanical gardens that are beautiful every season of the year.  In addition to the gardens, other things are offered including art exhibits, antique shows, special holiday events, a walking club, educational programs for adults, groups, children, and families, summer camps, a cafe and gift shop.  For more information, contact:  www.lauritzengardens.org

​The third picture in the bottom row of the header is of Spirit of Nebraska Wilderness Park and Pioneer Courage Park.  With the Louisiana Purchase in 1803, the United States doubled in size in a single day.  One half was developed and populated, the other half not even mapped.  To pay tribute to the "age of the Pioneer"--to the thousands of people who endured so many hardships while settling the West, First National Bank of Omaha commissioned the creation of two parks.  The 67 sculptures in the two parks are the largest installation of bronze and stainless steel sculptures in the United States.  Kent Ullburg of Corpus Christi, TX created the sculptures for the Spirit of Nebraska Wilderness Park at 1601 Dodge Street.  Utah artists Blair Buswell and Edward Fraughton created the large covered wagon train and bison for the Pioneer Courage Park which is located between 14th and 15th streets from Dodge Street to Capitol Street.  We encourage you to visit them. 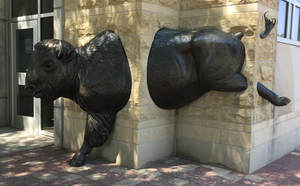