Nebraska State Days!
VUE CON 2017
Meanwhile, Questers continued to gather and shop the myriad of antiques that were provided by Sherry Stuifbergen for the annual fundraiser, to support the Grants fund.  Sherry has worked tirelessly to gather, price, wrap and transport all the items offered for purchase at State Day.  We owe her a gigantic thank you for her job very well done.​ 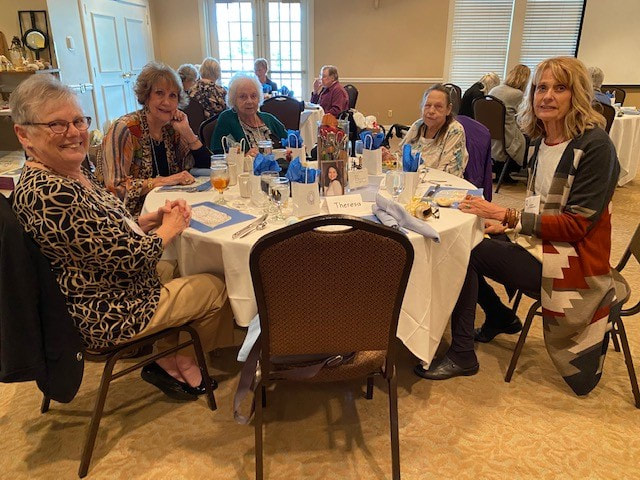 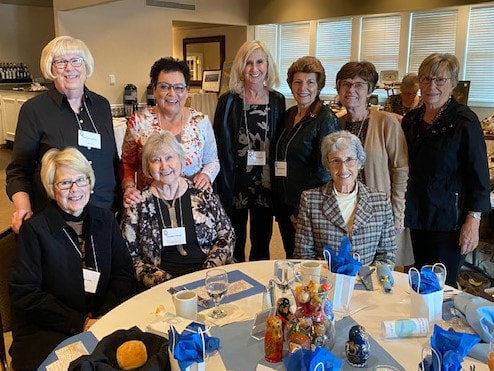 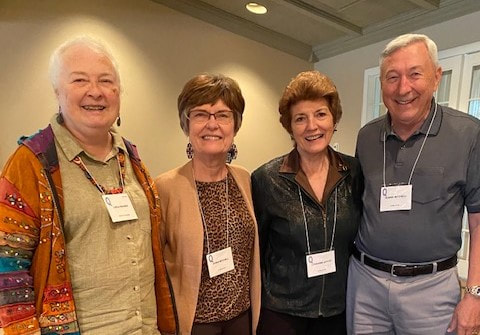 Just a few of the happy Questers above while Dan Reynolds serenaded us with his favorite Neil Diamond songs.
​​ 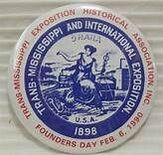 
​​ In 1898, the Trans-Mississippi and International Exposition was held for six months across 180-acres by Kountze Park. Starting in the early 1890s, Omaha boosters dreamed of hosting something special to build their city up. With the closing of the frontier in the 1870s, the stagnation of the railroad system in the 1880s and a nationwide economic recession that hit Omaha particularly hard in the 1890s, the city needed a shot in the arm.  There were more than 120 buildings constructed for the Trans-Mississippi Expo in 1898.  Construction began in late 1897, with the Administration Arch started first and finished first.​
The Grand Court was the main feature of the Expo.  Made of a 12-block long lagoon dug into the land between North 17th and North 23rd Streets, the court was surrounded by eleven massive buildings designed in a Neo-Classical Revival style to look like Greco-Roman architecture.  There were dozens of buildings immediately surrounding the Grand Court.​

​The Expo grounds were a collection of unique and vibrant buildings, sculptures and other construction that should be noted. Walker and Kimball designed many other notable items throughout the grounds. For instance, two viaducts crossing North 16th Street were beautiful art in themselves. The restaurants and towers flanking the south viaduct were regal, too. Kiosks and ticket booths throughout the Expo grounds were pretty, as well as the Band Stand awaiting performances and speeches by some of the luminaries who visited the Expo, including President McKinley and John Philip Sousa.  Buffalo Bill and his Wild West Show also performed for attendees.
​
​Now, there isn’t a lot of physical evidence that the Trans-Mississippi Exposition ever happened, that 120 temporary buildings once made North Omaha into a Greco-Roman dreamland, or that 2,000,000 people came to play one year, and 1.3 million came the next. Instead, a few historical markers stand at the Kountze Park today giving broad sweeping viewpoints of the event without exploring the nuances that made the events matter. 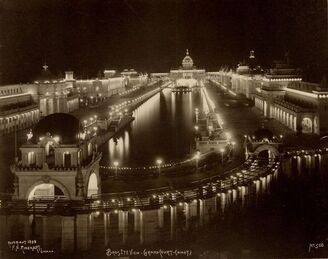 Just imagine how impressive this scene would be if you were in 1898 and had never seen an electric light bulb! 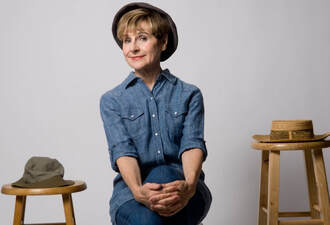 Our next speaker was Pippa White a Nebraska Storyteller.  She presented an amazing recounting  of the Orphan Train from the viewpoint of an orphan girl.  She told graphic tales of the heartbreak and the fear suffered by the little children who were sent on trains across the country to try to be placed with families.  The trains would stop at prearranged towns so people could "look the children over" and make their choices.  Some children found good homes but, some of them did not.  If children were traveling with brothers or sisters, most times only one child was accepted by a family.  The unaccepted child probably never saw his sibling again.  There were many thousands of children who were found to be homeless in large eastern cities because they were separated from their parents and had no means of support.  The cities had no way to take care of such a large problem, so they loaded the children on trains and sent them west.  What a sad, pathetic way to handle a human problem!
​
The North Platte Canteen provided traveling service men with a taste of home and best wishes as they went off to war.  Pippa told how citizens of North Platte heard that a troop train was coming through North Platte.  Rae Wilson spread the word and several women from the area took sandwiches, baked goodies, and coffee and met the train.  When the young servicemen and women came off the train they were not from North Platte but, they were from Kansas.  "Oh, well," the women said. "They are all our boys."  Everything was quickly served and the train went on its way.  From that day on, the women at the North Platte Canteen met every troop train and served everything they had to the soldiers, sailors, and airmen travelers.

Rae Wilson received permission from the Union Pacific Railroad to use the lunch counter at the station to serve the men and women on the troop trains.  Women from around the state came forward with food and other supplies. which was no small feat in the war-time economy.  Many items were rationed, but people were willing to share all they had. Canteen volunteers served sandwiches of all varieties, as well as home-baked cookies and doughnuts, deviled eggs and fresh fruit. Soldiers celebrating birthdays received cakes, often angel food made from locally farmed eggs.  A 1944 newspaper account quantified a single day's donations from the Nebraska towns of Merna and Anselmo.  Caravanning 70 miles in 22 cars and three pick-up trucks, volunteers brought to North Platte: 53 birthday cakes, 127 fried chickens, 58 dozen cookies, 32 dozen cupcakes, 73 pounds of coffee, 163 dozen eggs, 68 dozen doughnuts, 41 quarts of pickles, three crates of oranges, nine pounds of ham, 160 loaves of bread, 40 popcorn balls, 50 pounds of sandwich meat, four cartons of cigarettes, four decks of cards and $600 in cash. Cash donations paid for items like juice and milk, delivered directly to the canteen by refrigerated truck.  From Christmas Day of 1941 through April 1, 1946, volunteers greeted and fed about 6 million service members.  ​  For years after the war ended and the soldiers returned home, the canteen ladies of North Platte received thank you letters from servicemen all around the United States. 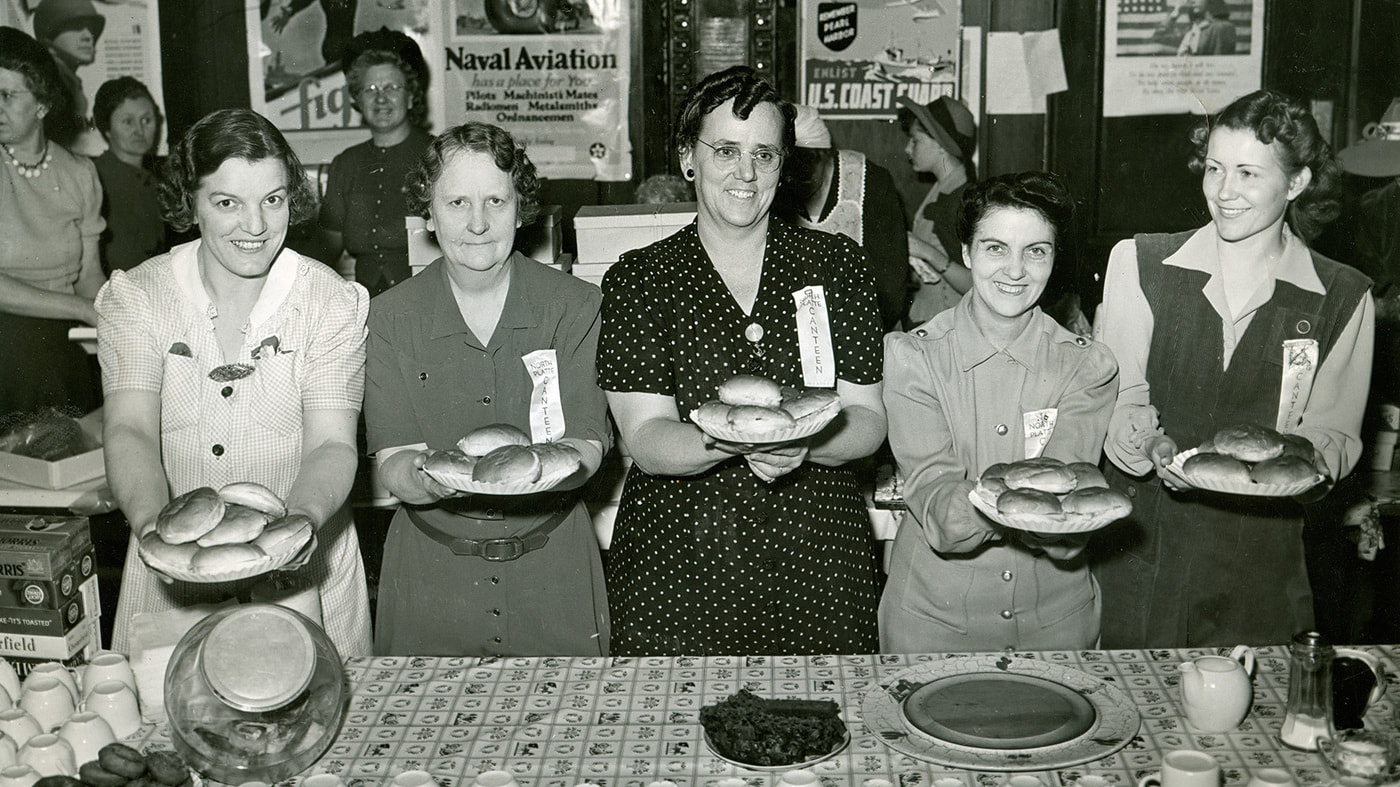 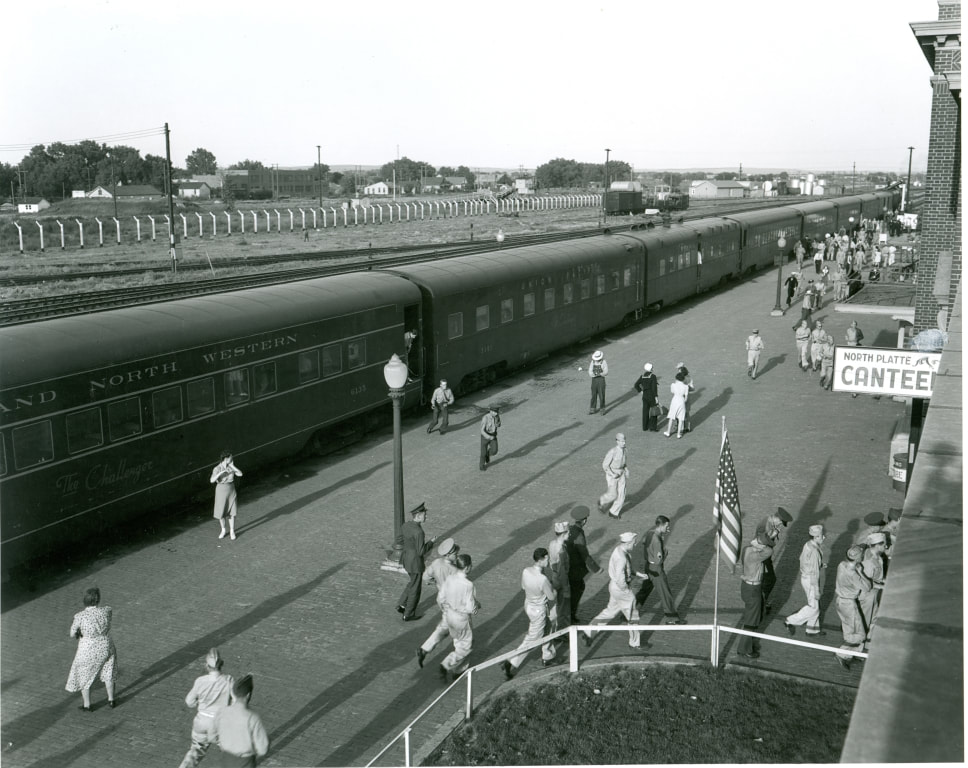 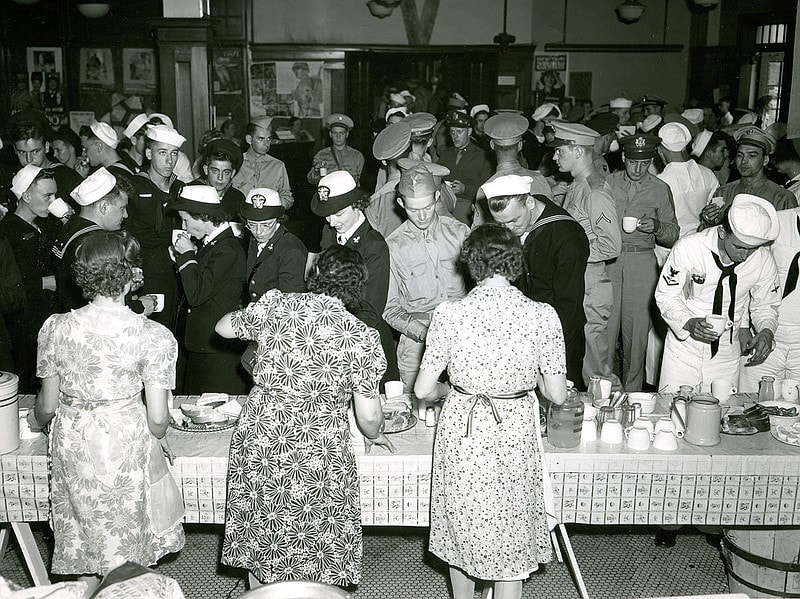 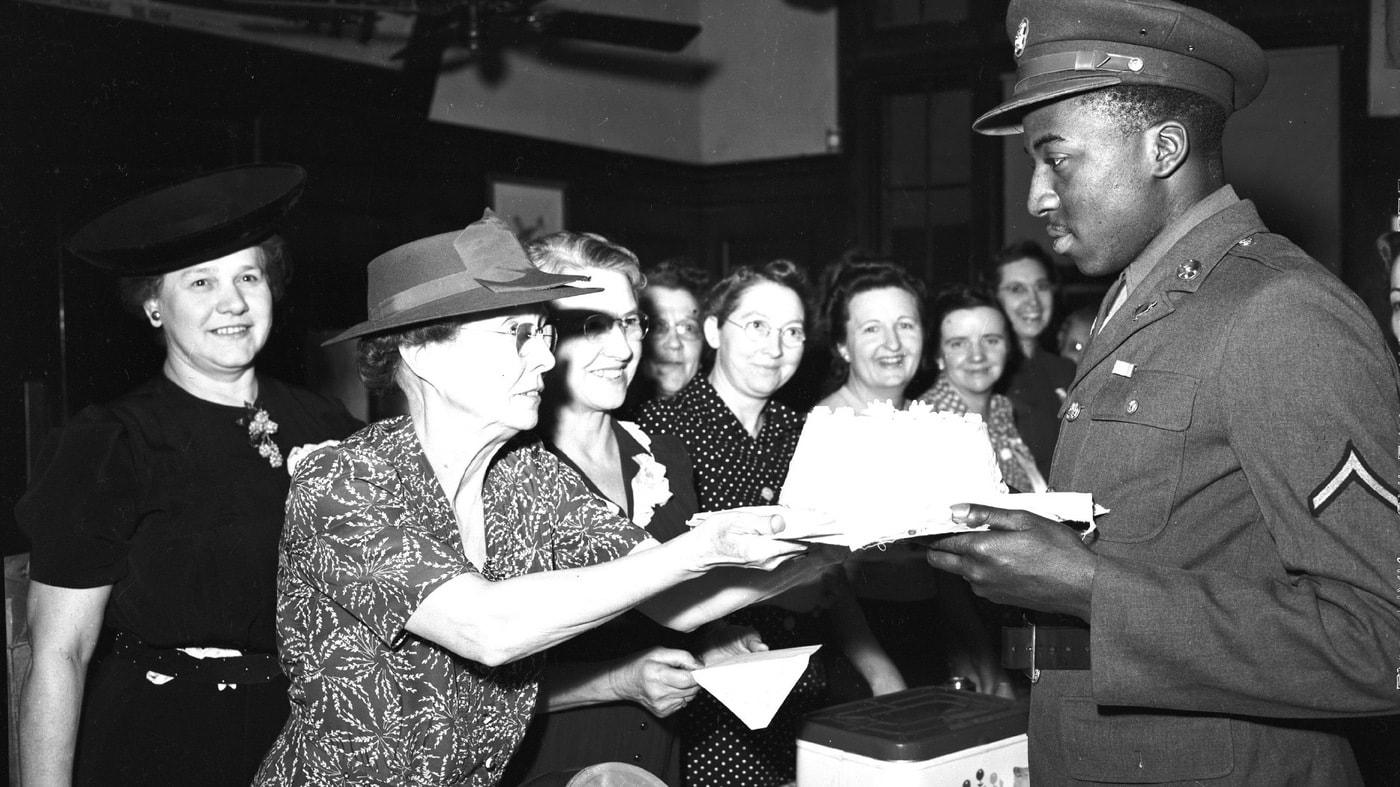 Following Questers tradition, Laurel Zielinski, our previous State President passed the hat to our new State President, Doris Rush.  We all look forward to Doris's term of office.  She has a vast amount of leadership experience and a wonderful "leader's attitude."  Congratulations, Doris.  We can't wait to see what you have in store for us! 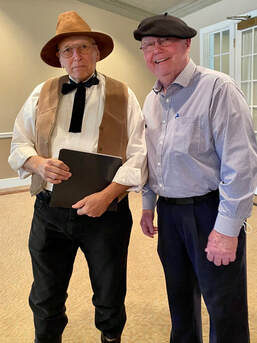 My name is Pierre Sarpy from St Louis.  When  I was born I was named Pierre Sylvester Grégoire after my father.  Later they called me Peter Sarpy to make it easier when dealing with the Angliese!  This man here is my friend and sometimes mentor: he is Lucien Fontanelle, father of Logan Fontanelle. [LUCIEN NODS AND SMILES].
Through the magic of space and time we, Pierre Sarpy and Lucien Fontanelle, have heard of you, “The Questers” and the wonderful things you will do [LUCIEN NODS APPROVINGLY].  And we agree that History Matters VERY MUCH [LUCIEN NODS PROFUSELY]…Mostly because WE are part of YOUR history, and we think we matter!  Don’t forget, someday you too will be history…and like us, you will hope your history will matter too!!
But let me start at the beginning…
In 1803 President Thomas Jefferson purchased Louisiana Territory from French Emperor Napoleon Bonaparte.  Jefferson quickly established a plan to explore this new land.  He placed a band of explorers under the leadership of Meriwether Lewis and William Clark.  For 3 years they explored the new territory and more.  They discovered wondrous things, including the land we are in today and that we call Nebraska.
While Lewis and Clark were exploring the West, I was born in St Louis in 1805.  St Louis is a city founded in 1764 by French trappers and named for the King of France.  Soon it became a Spanish city and then again a French city just before I was born.
Now we fast-forward:  In 1823, I came to this area to work at the American Fur Company trading post near Council Bluffs, Iowa.  I married an Omaha Indian woman and she taught me the Omaha and Otoe languages.   Coincidentally, in 1823 a mister, Joshua Pilcher, also an acquaintance of mine, established a trading post for the Missouri Fur Company at what today is Bellevue on the west side of the Missouri River.  That trading post was later called Fontanelle’s Post while it was operated by my friend here, Lucien Fontanelle [LUCIEN NODS].   After 1840 I took over the trading post from Lucien Fontanelle once he passed on to the happy hunting ground [LUCIEN LOOKS SAD AND HAPPY].  I also ran a trading post on the Iowa side of the Missouri south of Council Bluffs and I operated a very successful ferry service across the Missouri from Bellevue to Iowa.  In 1849 I worked to have a United States post office established in Bellevue. This was a great honor and was believed to establish Bellevue as a real and important town.  In 1854 Nebraska Territory began and its first governor (Francis Burt) lived in Bellevue.  Over the next ten years I watched the Nebraska Territory and the Town of Bellevue grow.  They say I died in 1865 but, for you Questers, if HISTORY MATTERS, then I and my friend Lucien will live forever!  Today you will see the name “Fontanelle”  marking  many places in this area.  Later they even named a county after my name… the county where my beloved Bellevue is located.   So now, with this small history perspective I offer you the following invitation:  I will speak now in the more familiar accent of the Angliese!!