Nebraska State Days
VUE CON 2017
Friday evening,7:00 p.m. - 8:30 p.m., we met at the Sarpy County Museum for dessert and touring the museum.  What fun we all had seeing Nebraska Questers after being home bodies for the last 3 years compliments of Covid.  Thank you Ben Justman for the invitation to gather there!
Saturday morning at 8:30, State President Doris Rush opened our meeting with the introduction of the Executive Officers followed by reports of activities by the Committee Members and  the Chapter Presidents.  It is always interesting hearing about the activities of other Nebraska Questers.

​We all found our places at decorated tables and enjoyed the coffee and tea with sweet rolls and muffins. Each table was decorated differently with antiques and/or things from earlier in our lives. At the side of the room were all the theme baskets for the P&R fundraiser.  What an interesting selection of items in the baskets!  Everyone was happy to purchase tickets for the drawing.

These are the table decorations we all enjoyed: 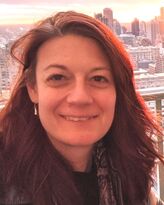 Our first speaker of the day was Jeannette Gabriel PHD and Director of The Schwalb Center,  University of NE Omaha. She presented an interactive program on genealogy entitled “Finding Your Roots”.

Jeanette described sources available for searching for records of your ancestors. While some sources only show names and dates, other information adds much to your understanding of your ancestors. It is important to first formulate a plan for finding your roots. A written plan will help drastically in your efforts.
​
1.  First, list what you do know about your ancestors and the additional information you would like to know.
2.  Try to map out the places they lived before they came here and on their way to this country.
3.  How did they live.
4.  Why did they decide to immigrate to America.
5.  How did they travel to America.
6.  Who were others who traveled with them.
7.  When they arrived in America, where did they settle?
8.  Now, U.S. Census records are available through 1950.
9.  Talk to relatives, especially the older ones.  They may have pictures and know personal information about your ancestors.
10. After every time of research, make notes about the information you found and where you found it.

Names and dates are easier to locate, but your research is much more meaningful if the information listed above is part of your records.

Next, you need a standardized method of saving your information. Many forms are available in conjunction with genealogy computer programs, or in forms designed by others who are also pursuing their genealogy. Searching for your genealogy can be fascinating as you uncover information about your ancestors. In fact, the search can be addicting. Many sources of records are available in the United States. When you uncover information about your ancestors before they came to America it becomes a little more difficult, but it is possible. The more you know, the more exciting your search becomes!​ 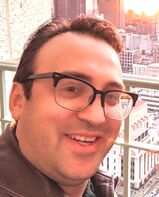 ​Our second speaker of the day, Ben Justman presented a fascinating slide show while he described the history each slide represented. His presentation, titled “History of Sarpy County through Historical Objects” was so informative and interesting.

Ben Justman became the Executive Director of the Sarpy County Museum in 2010, following in the footsteps of the previous director, the late Gary Iske. Justman holds a Master of Arts in History from Western Illinois University as well as a Bachelor’s in History from Central College and received his Museum Studies Certification from Northwestern University’s School of Professional Studies. Prior to becoming a Nebraskan, he was previously involved with both small and large museums, including the Chicago Museum of Science and Industry and the Imperial War Museum in London. He particularly enjoys both military history and local public history, making Sarpy County a great fit for him. 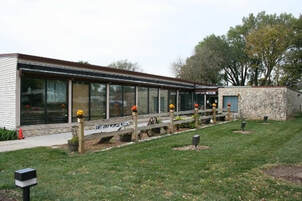 ​
​Ben invited us all to come, explore Sarpy County’s past at the Sarpy County Historical Museum. It is over 4,000 square feet and houses exhibits that encompass local history from the time when its original inhabitants freely roamed the Plains to the present day thriving metropolitan area. 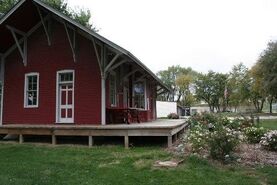 The oldest still standing train depot in Nebraska is adjacent to the museum. Built in 1869, it relocated to its present location in 1987. The building served the Omaha Southwestern Railroad and later served as the Burlington Railroad depot. The depot, now restored, features a pot belly cast iron stove, morse code telegraph keys, and other artifacts that highlight early railroad history in Sarpy County.  A 1960s era Caboose also sits on museum property. This caboose relocated to the museum in 2014. Efforts to restore the caboose are underway. Once completed, the inside of the caboose will spotlight railroad history in Sarpy County during the twentieth century. While restoration is in progress, visitors will not be able to enter the caboose but can still get an up-close look. 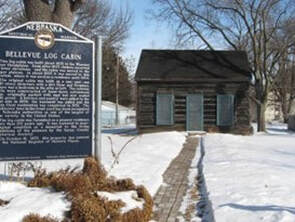 ​The Bellevue Log Cabin is known as the oldest building in Nebraska. According to local legend, the cabin, constructed between 1830 and 1835, was a part of the Jacob Astor Fur Trading Post, near the Missouri River. The cabin was since relocated twice and is presently located at 1805 Hancock Street in Bellevue. The cabin constructed from cottonwood logs measuring a foot thick with Native American lodge pole style rafters, is in near original condition. The Sarpy County Historical Society purchased the property in 1954 and it is now on the National Register of Historic Places since 1970.
​ 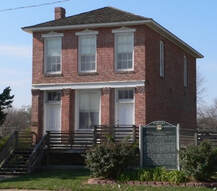 ​
​The Fontenelle Bank,  also known as the Fontenelle Courthouse, is also listed on the National Register of Historic Places. Built in 1857, the bank failed shortly thereafter due to the Panic of 1857 and their “wildcatting” banking practices. Over the years the building served a variety of purposes. It was a bank for only a couple of years then used as a courthouse and city hall. The second floor has a ballroom. A walk-in vault, 1867 stove, 1880 vault, among other treasures are on the first floor.

​ Sarpy County Museum is growing! Our collection of regional history has outgrown its current home – and we are thrilled to announce plans for expansion. Details are still in finalization so stay tuned for the official campaign kick-off and groundbreaking. Our new facility will feature increased exhibit space, enhanced educational offerings, and improved research and storage capability.

​Fundraising, a necessary function for any organization, was the selling of ticket chances to win a beautiful Theme Basket donated by members.  The basket themes included "Patriotic Objects", "Nebraska Produced Products", "Nebraska Wine",
​"Woodworking Objects by Ben Harvey", and other lovely baskets.  Members purchased tickets and distributed them next to the baskets they most desired.  All winners of the drawing were well pleased and Nebraska's P&R fund received a nice donation.
​
Thank you Corps of Discovery for a wonderful day of celebrating 2022 Nebraska State Day.  We all realize the amount of  work and planning required to have a successful State Day, and you and all your helpers did an exceptional job. It was a very fun and informative day.
​
​
​