VUE CON 2017
J. Sterling Morton chapter members meet monthly from Sept. through May.  Our name comes from the man who started Arbor Day and lived in Nebraska City in the second half of the 19th century along with his wife and family.  J. Sterling Morton Questers #1021 members have some great ideas for programs.
In October, our meeting was held at the Ambassador Care Center.  One of our long-time members, Dorris, lives there so she was able to attend the meeting.  Our hostesses were Elaine M. & Charlotte. Judy had a program on Currier & Ives lithography.  Roll Call was "head dress".  Members brought things such as sun bonnets & wigs.

November found us at the home of Angie who served brunch ahead of the meeting.  Angela showed us many quilt fabric samples & explained the difference in old and newer fabrics & colors.  Roll Call was "foot coverings." 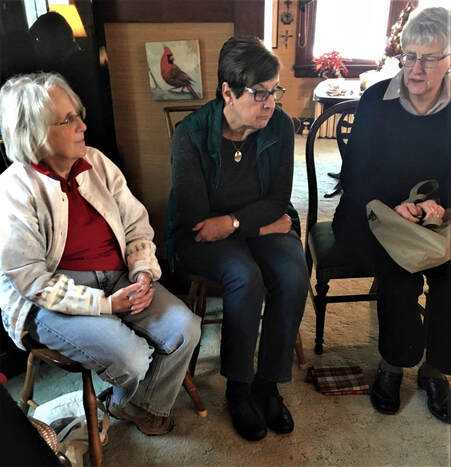 It was cold with snow in January, but we were able to meet at the home of Helen, who always serves a good brunch.  Margo gave the program on quarters with the state parks on the back.  Now we all look at our quarters before we spend them!  Roll Call was neck wear.  Of course, there were necklaces but also collars and a mink wrap.  Members in this picture are Sue on the left, Angie in the middle, and Helen on the right. Helen seated us in the living room of her home with original lighting, wallpaper and woodwork.  She told us a little of the history of the home, how it was built for a bride-to-be who jilted the groom so, they never lived in this beautiful house.
Pictures in the Heading...

The first picture in the top row is of some of the  row crops that are grown in eastern Nebraska, such as corn and soybeans.  Hay is harvested for livestock.  The country is rolling hills and flat river bottoms.  It is also a great place to go bird watching as it is located near the Missouri River flyway.

The second picture in the top row is of Wildwood Historic Center in Nebraska City.  Some of our members are employed here.    There is a great appreciation in the Center for history and all the furniture, clothing and trimmings that go with a Victorian House.  Wildwood has also been the recipient of a State Quester Grant for restoration of the pump organ.  It has been played by staff and guests in the home which is on the National Register. The house was lived in by the Jasper A. Ware family from 1869 to the 1950's.  On a snowy, misty day, it creates a beautiful image.

​The third picture in the top row is of a herd of horses in a pond, a common sight in the hot summer months in eastern Nebraska.  These mares and colts are from Otoe County.

The first picture in the bottom row is of the Otoe County Court House in Nebraska City.  It is the oldest public building still used for its original purpose in the state of Nebraska.  It was built in 1865.

The second picture in the bottom row is of J. Sterling Morton, author of Arbor day.   This statue of Morton stands near the entrance to Arbor Lodge his home in Nebraska City until his death.  He is credited with the idea of planting trees so the park is filled with a huge variety.  It is located on the west edge of Nebraska City.

The third picture in the bottom row is of Civil War Reenactors who are active in our area, both to demonstrate life during the Civil War and their service with Lewis & Clark during their great expedition and mapping of our country.  I love to visit with the director of the Mayhew Museum as he is also a reenactor as a Civil War soldier and for Lewis & Clark too.  Can't beat history for entertainment.